Tyson Whistler chips away on his “Kracken” ice sculpture. (Photo by Doug Loyer)

A giant diamond ring made of ice was displayed in front of Baker and Baker. (Photo by Doug Loyer)

A Peoples Bank logo made in ice. (Photo by Doug Loyer)

This was the Clutch MOV sponsored ice sculpture. (Photo by Doug Loyer)

An ice octopus was displayed in front of Just A Jar on Front Street. (Photo by Doug Loyer) 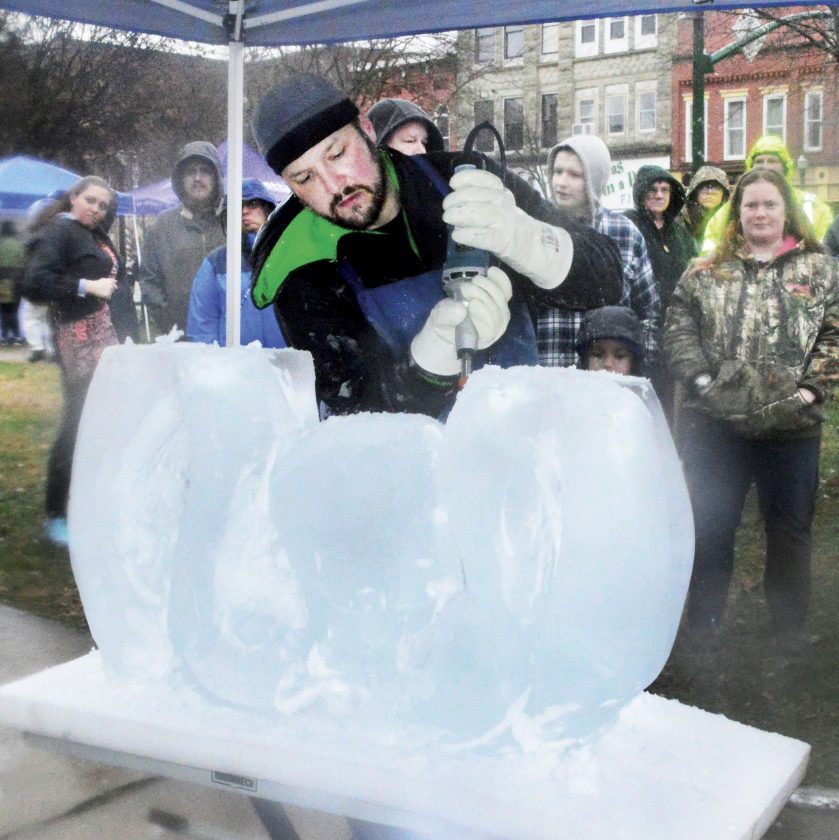 Tyson Whistler chips away on his “Kracken” ice sculpture. (Photo by Doug Loyer)

MARIETTA — Hundreds of people bundled up for the Marietta Ice Festival on Saturday to see ice sculptures on display in downtown Marietta and to see a live ice sculpture being created.

With temperatures in the mid 40s, the race with time was on for the unique four-hour event.

Seventeen ice sculptures by local artist Tyson Whistler were displayed on the sidewalks in front of businesses on Front, Putnam, Green and Second streets.

Originally planned to be part of Marietta Main Street’s January First Friday Fire and Ice event, it had to be rescheduled because of the unseasonably warm weather. It was rescheduled for Saturday, rain or shine. It did rain lightly but then tapered off.

Ice sculpting is an art form that is temporary because of its medium. Much like an elaborate sand castle or a live musical performance, it doesn’t last long. But it creates a lot of excitement because of its limited life and it leads to an appreciation for ice sculpting’s creative process and unique beauty. 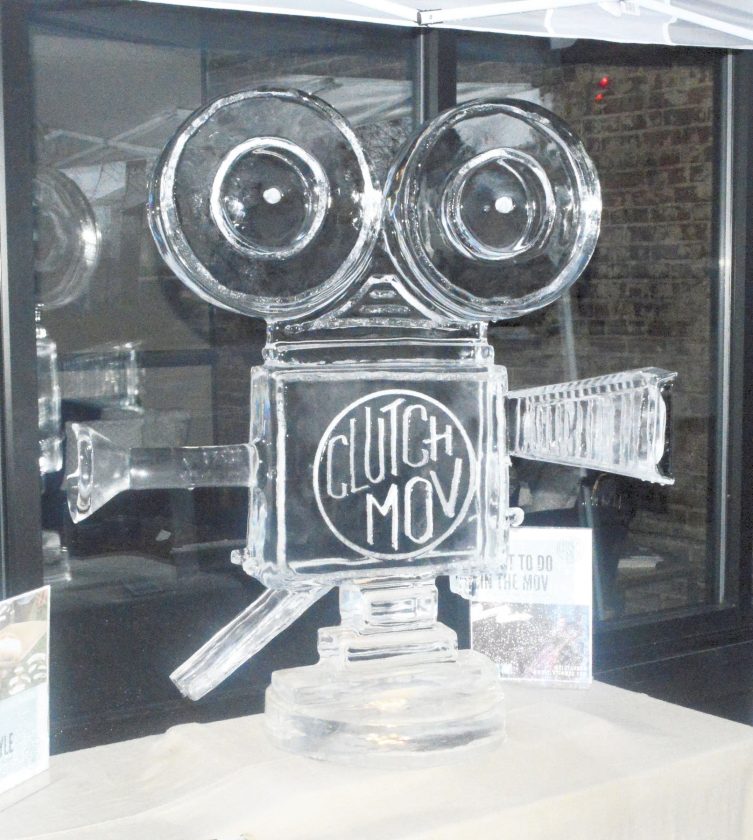 This was the Clutch MOV sponsored ice sculpture. (Photo by Doug Loyer)

The creator of all of the Marietta Ice Festival’s ice sculptures was Tyson Whistler, Executive Chef at the Glennwood Community, an independent and assisted living facility in Marietta and title sponsor for the event.

“I’m working on sculpture number 18 right now,” Whistler said Saturday as he was carving on a giant block of ice before a large crowd on the Armory lawn. “This will be ‘Kracken,’ a mythological squid-like creature that takes down pirate ships. This is the first part. There will be two tiers with the top being a pirate ship.

“It’s a blast to create these ice sculptures,” said Whistler, who has been ice sculpting for about 15 years. “My favorite ones this year are probably the octopus sculpture and the Ohio State sculpture.”

“Every year people want to see more and more and we are doing our best to make this festival grow,” he said.

With the Marietta Ice Festival starting to carve its way into being a popular community event, it looks like organizers plan to make the festival an annual event on its own. 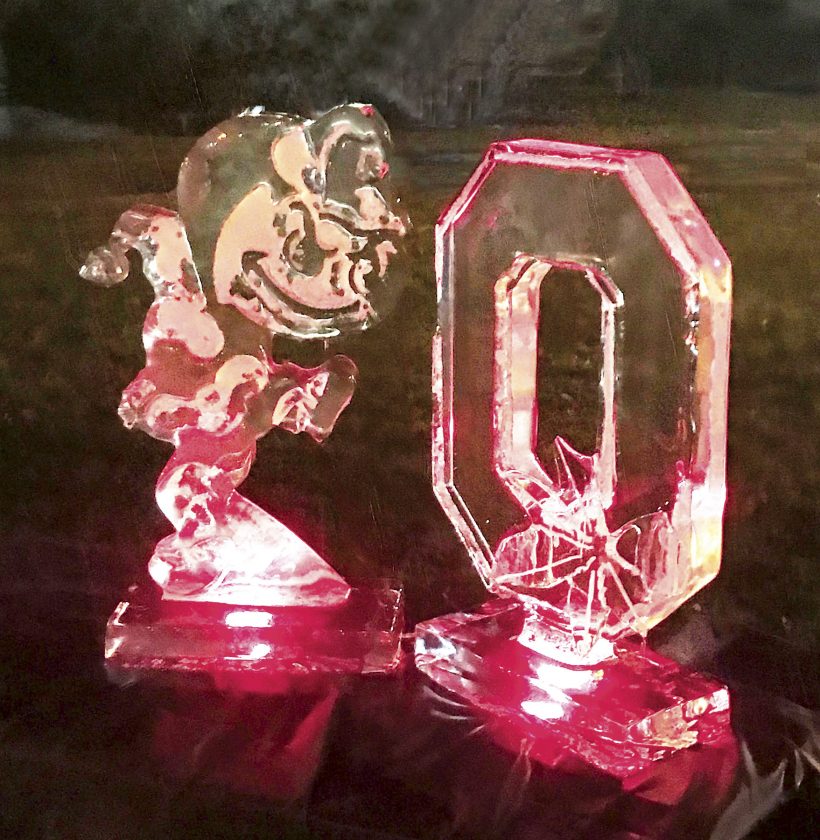 “The sculptures are amazing, as they always are,” said Marietta Main Street Interim Director Cristie Thomas. “Some of the sponsors are the same as we’ve had in the past and Tyson tries to redesign the sculptures that he provides for them so there are some new ones. He has done all 17 of the ice sculptures this year and will be sculpting a piece live on the Armory lawn, which will be the eighteenth.”

“This event is terrific,” said Marietta Main Street board member and Clutch MOV owner Sarah Arnold, who was excited about the ice festival. “It’s a great way to showcase an art form that we don’t often get to see. It’s neat that we have local artists who have that type of skill and are willing to share it with the community.”

“As far as I know, Marietta has the only ice sculpture festival in Southeastern Ohio,” said Clark. “This is a great place to come and visit.”

On the Armory lawn, Glennwood Community employees handed out hot chocolate donated by Jeremiah’s Coffee House and the United Way Alliance had a booth for children to make s’mores and had activities. 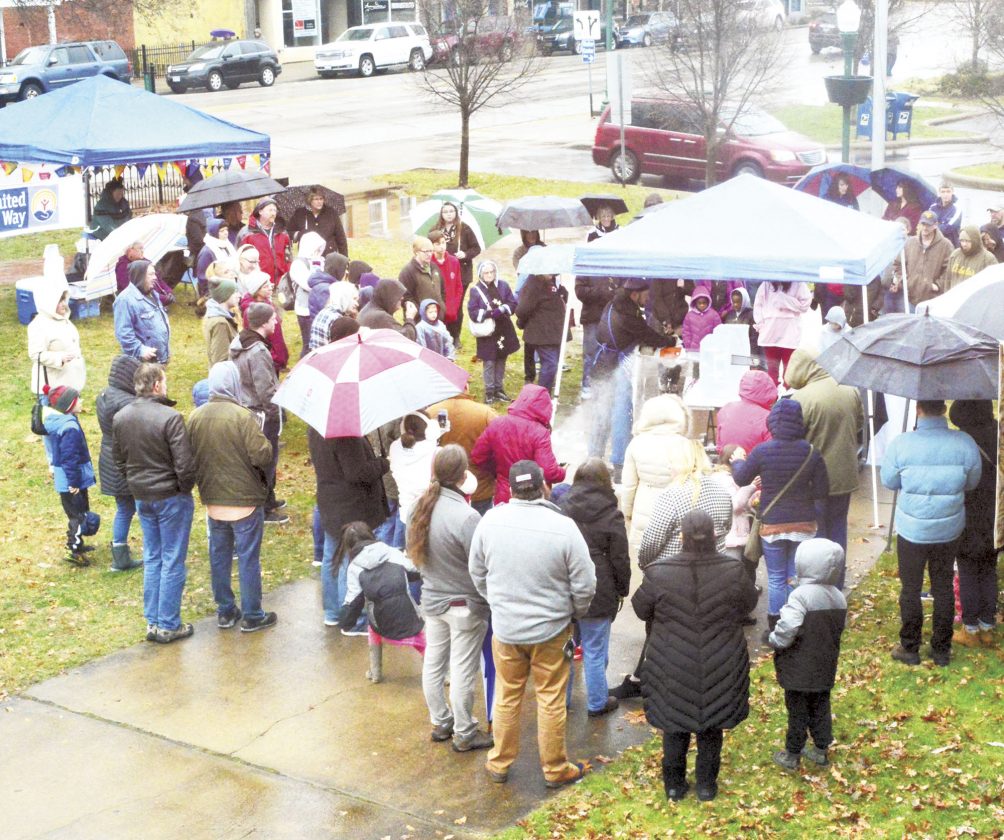 “I love this event. I’ve participated in it every year,” said Baker and Baker owner Larry Hall. “I think it’s absolutely magnificent. Anything we can do to get people milling around downtown and get their attention is great.” 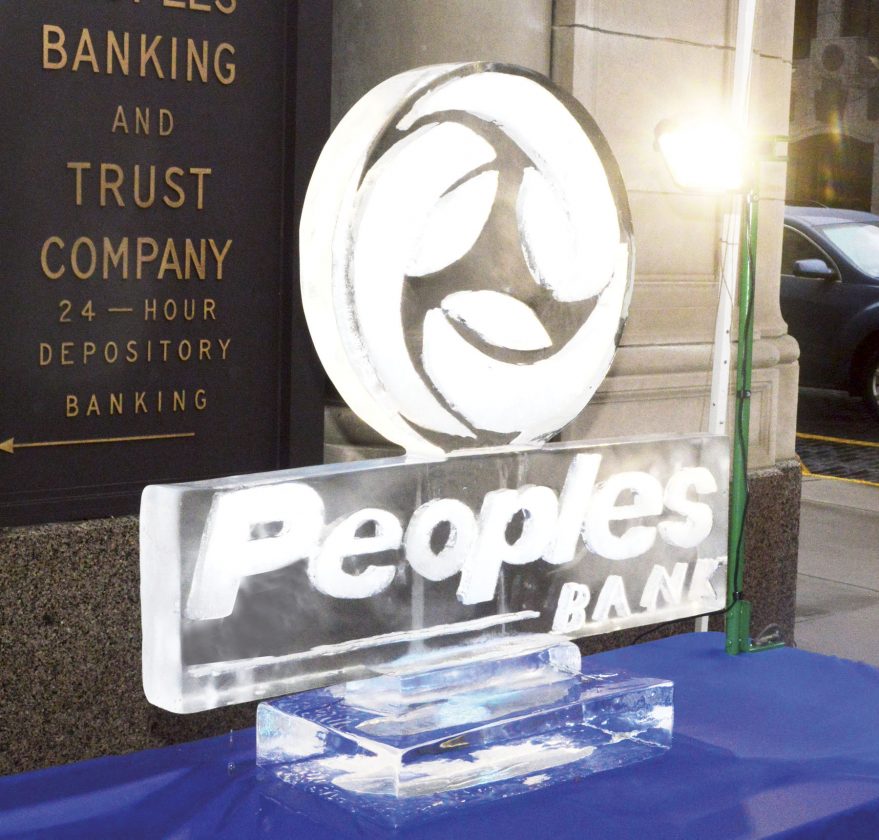 A Peoples Bank logo made in ice. (Photo by Doug Loyer) 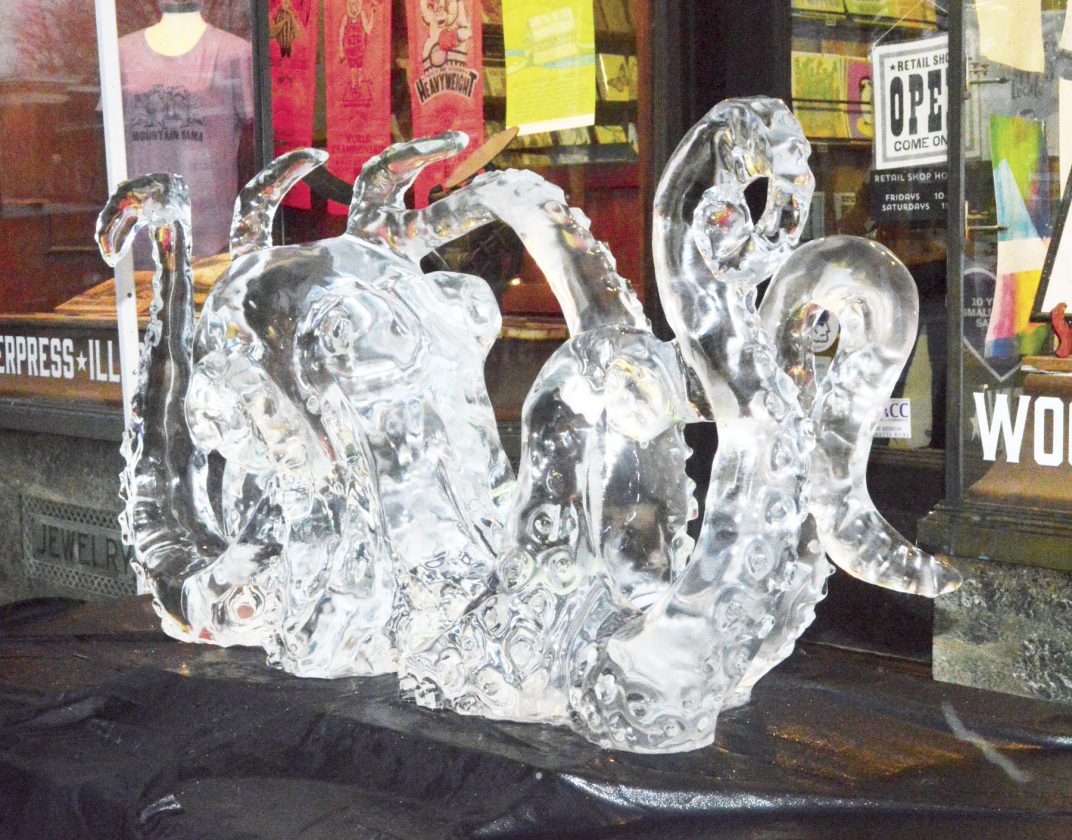 An ice octopus was displayed in front of Just A Jar on Front Street. (Photo by Doug Loyer) 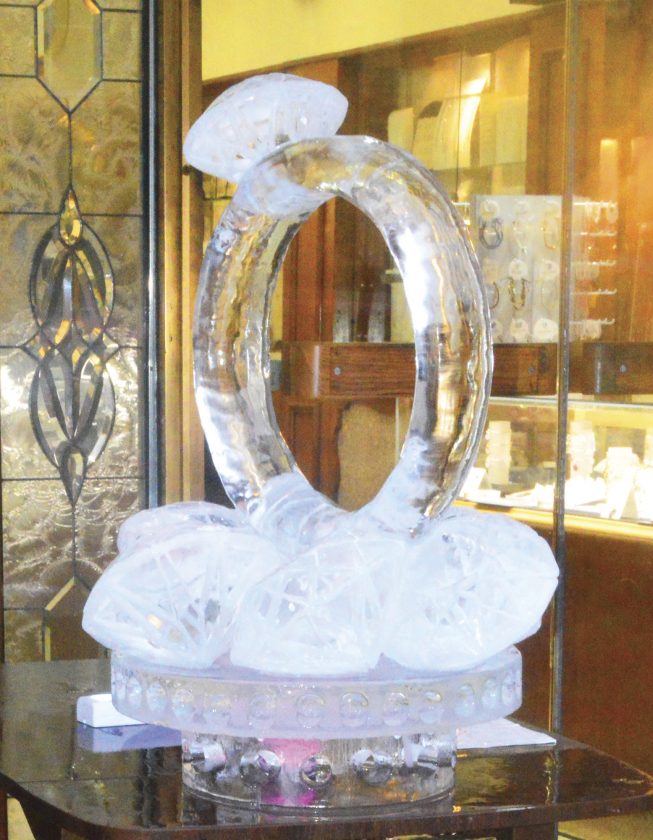 A giant diamond ring made of ice was displayed in front of Baker and Baker. (Photo by Doug Loyer) 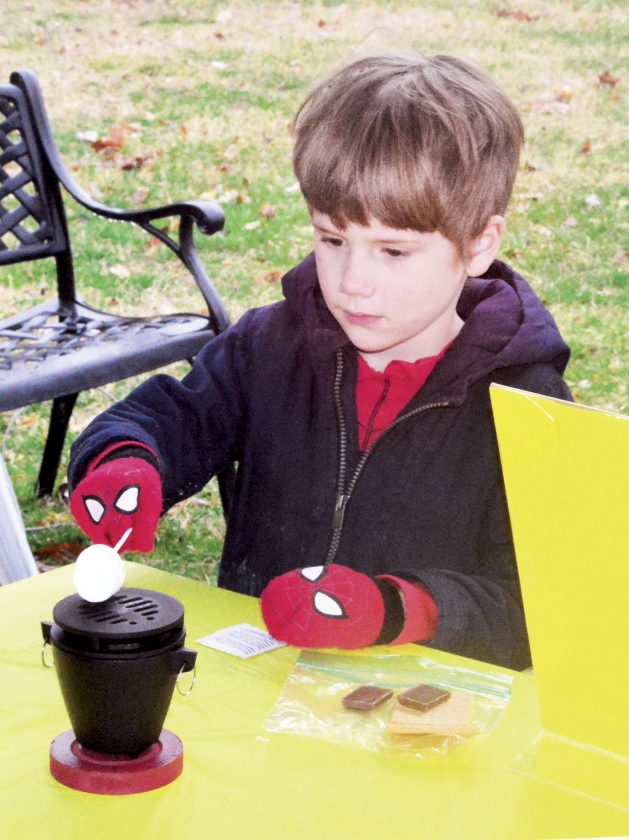 Side Notes from Artist David Witbeck on his show at Maine Art Hill in...

Puerto Vallarta begins to rehabilitate sculptures in the city

Appleton sculpture is turning heads, some living nearby want it moved

Artist Kathy Ostrander Roberts – Encaustic? What? from an Artist on Maine Art Hill...