Back on March 7th, I went to The Armory Show in NYC, and in looking back, that was around the time that growing awareness of the threat of coronavirus was becoming more widespread, but still very much in the early days in regards to activity in New York City. I debated whether to go to the show or not, but from what I was reading in the news at that time, the main suggestions were to not shake hands or hug anyone, as crazy as that may sound from today’s perspective. The organizers of the show issued a statement that: “US health officials have indicated that risk remains low across the United States, including New York City, advising ordinary flu season precautions, such as regular hand washing. According to a Center for Disease Control (CDC) statement updated February 25, 2020, ‘at this time, the virus is NOT currently spreading in the community in the United States.’” I am stating all of this purely as reporting the general mindset at that time, the precautions that were issued at that time, and my reasoning behind attending the event.

With that said, I went ahead and attended the show as I have in years past, and photographed art works that interested me, and have and will continue to share more about what I saw at the fair. In looking at my photographs from the show, this particular piece struck me as a foreshadowing of events that soon followed the show.

The painting is titled “Americans,” and is a 48 x 48 inch acrylic on canvas from early 2020 by Christine Wang. She received her BFA from The Cooper Union in NYC and her MFA in painting from UCLA in 2013, and currently lives and works in San Francisco. As you can see, it depicts two women (labeled “Americans”) happily balancing themselves on the bow of this luxury boat (labeled “America”) which seems to be sinking. Scroll down for more … 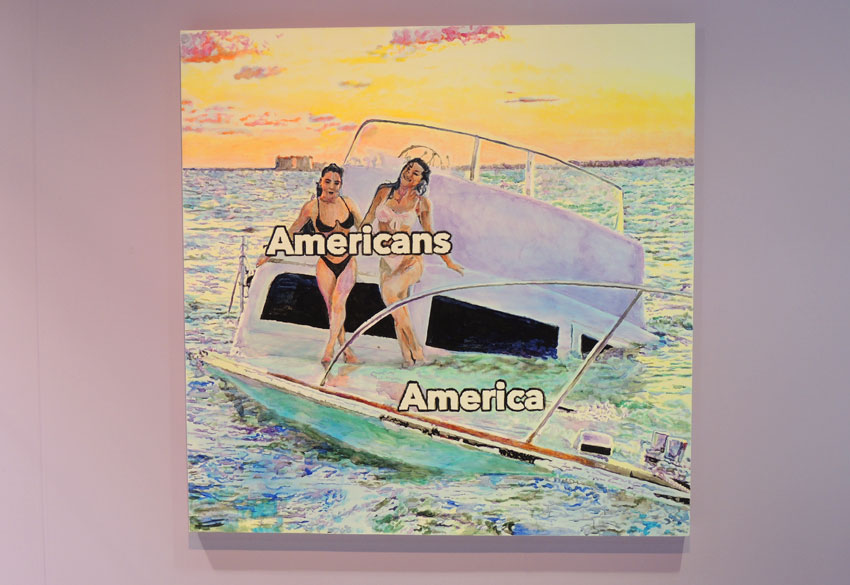 Since this painting was made in early 2020, and on view at the Armory Show on March 7th, I can’t say if there was a specific event that Wang is referring to, or if this painting just reflected a belief that Americans were oblivious to problems in America. That was the basic interpretation that I made at the time, and thought that this was a well-painted metaphor for that idea.

But as public awareness of the dangers of coronavirus continued to grow, and then public outrage resulted from crowded beaches in Florida during Spring Break only 9 days later on March 16th, this painting took on an expanded meaning, at least for me. Suddenly, this painting seemed to foreshadow events during Spring Break and almost stands as a warning or reflection of the delayed understanding of the coronavirus threat in late February and early March. It sends a powerful message in this revised context, don’t you think?

How KAWS Creates Sculptures Beloved by Collectors and Dior