I posted something the other day about my grandfather’s matchbook collection, which he made into a tabletop (below left), showcasing a variety of matchbooks from the 1940s-1950s. I received a follow-up from my uncle today, who shared a picture of his collection of ticket stubs (below right). I think it’s pretty interesting how a father and his son both displayed their respective collections in similar ways, especially since these collections were assembled several decades apart from each other. 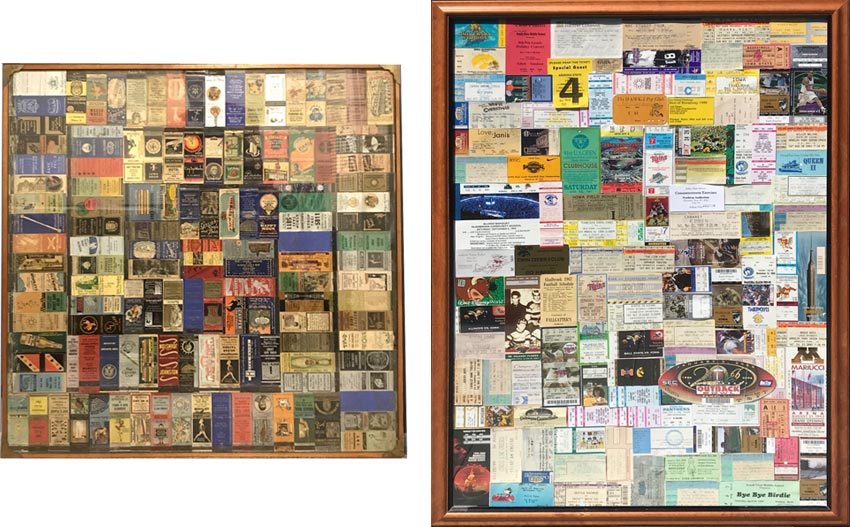 I zoomed in on the picture of ticket stubs, looking for a few that caught my attention from a visual standpoint, and here’s three favorites of mine: at left, a detail of a ticket stub from the 68th Rose Bowl Game in 1982, between the Washington Huskies and the Iowa Hawkeyes. We won’t discuss the game or the score, for fear of upsetting any Iowa Hawkeye fans, but I like that the ticket stub announces this game as the “Grandaddy Of Them All.” 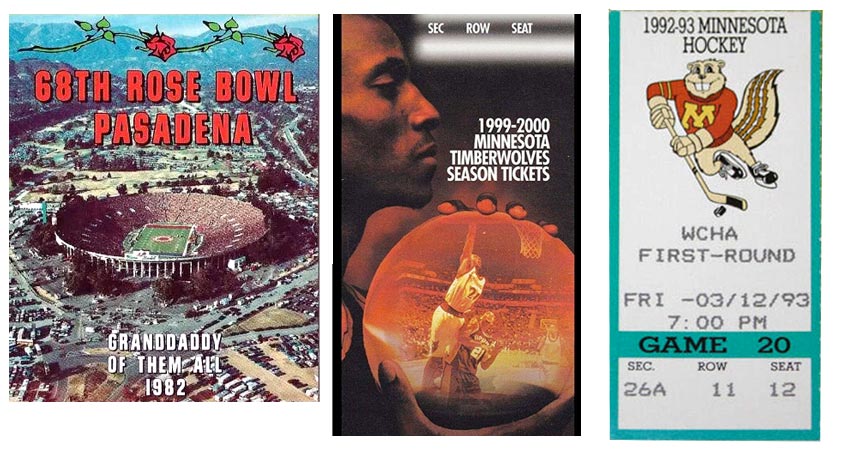 At center is a detail of a ticket stub from a Minnesota Timberwolves NBA basketball game during the 1999-2000 regular season. I love this one – the graphic designer was a genius (in my opinion). It shows Kevin Garnett holding a basketball, which transforms into a “crystal ball” of sorts, allowing Garnett to show the fans a future vision of him dunking over Tim Duncan of the Spurs. It reminds me of the scene from the Wizard of Oz, where Dorothy looks into the crystal ball to see her family.

Last but not least, we have a ticket from a Minnesota Gophers college hockey game … I’m including this as a favorite, because where else other than Minnesota can one find an image of a letter sweater-wearing animal in hockey skates? By definition, a gopher is a “burrowing rodent of the family Geomyidae,” but this one can shoot and score goals with a smile on his face.

One last thing to note: while I featured 3 sports-related ticket stubs from the collection here, my uncle notes that his collection is not just about sports. It also includes ticket stubs from events in high school, tickets from plays, concerts, a boat ride, and other events that marked significant moments in his life. This big picture approach turns it into an auto-biographical self-portrait of sorts, which I think is really cool.

If anyone out there has their own unique collections and corresponding stories that they’d like to share, let us know.

Inside rock’n’roll’s teddy bear was a passionate artist

Why Is the California Attorney General Investigating the San Francisco Art Institute?

Making Use of the Mundane: Black Performance & Becoming