We have a new submission from one of our blog readers based in Tow, Texas, who sent the following pictures of a rock that she found buried about 8 inches deep in the ground under a huge tree. Yolanda writes that “… I’ve read that big old trees are a good place to look for artifacts, right around the base of them … the area where I found this face effigy is loaded with flint and chips and tools, and it’s not uncommon to be walking and find arrowheads on the surface of the ground.”

Here’s two different-angled views of the same rock; I can certainly see what seems to be a forehead and brow with a nose-like shape proceeding down. What do you think? 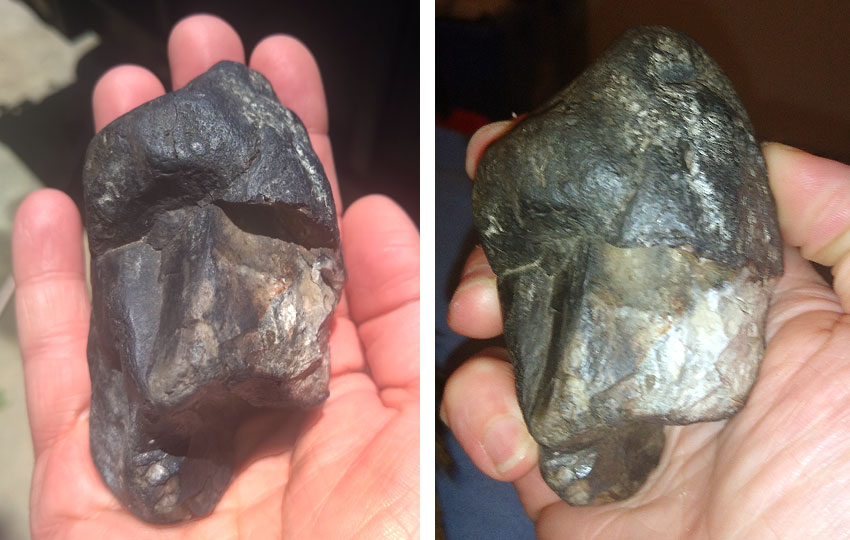 Yolanda adds: “I read somewhere that the Indians worshipped a deity that always had one eye closed and the other open and that’s why the eyes are like this on a lot of the face effigies? I have also read that you have to be careful with these. I guess some are considered bad or evil. I personally do not and have never gotten any bad vibes from my effigy but I am curious if the deity it’s suppose to represent is a good or bad one?” Can any scholars or readers with expertise in this subject provide any info via the comments section below?

Here’s another picture from Yolanda’s collection of images that struck me as odd, or certainly as a logical proof of a human hand involved in modifying this rock (as opposed to being just a natural shape that coincidentally looks like something). Do you see in the left picture how there appears to be an upwards-pointing arrow whose edges seem clearly carved or shaped in some way? I’ve included a blown-up detail with outlines on the right for a second view. Does anyone out there have any thoughts on this? Again, please feel free to share ideas in the comments section below. 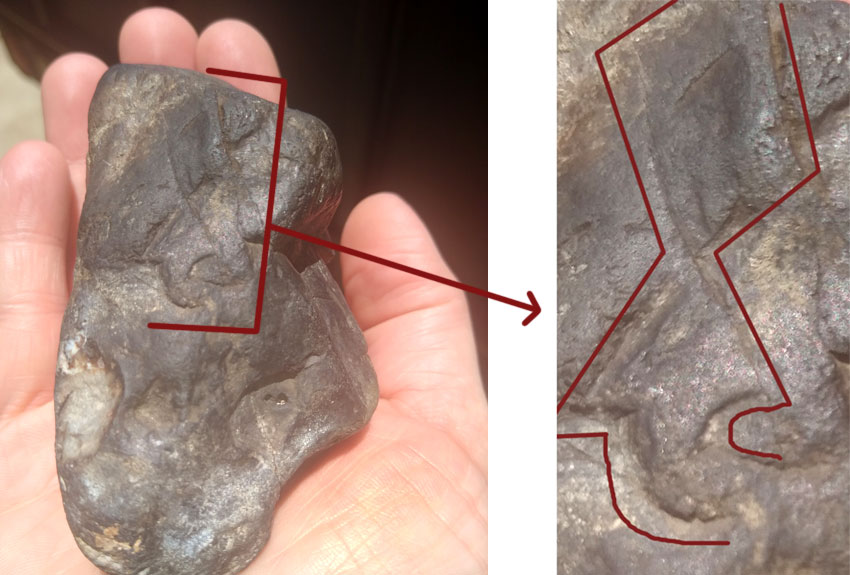 One last comment that Yolanda included that sent me looking for more info is this: “The pictures don’t do it justice! In fact, to me the top of the head of the effigy almost looks like it might be slightly elongated, making me wonder if this might be even before the time period of the Native American Indians … like maybe Nephilim or something else!” I have to admit that I had no idea what “Nephilim” meant, and a quick search result tells me that “The Nephilim are mysterious beings or people mentioned in the Hebrew Bible. They are large and strong; the word Nephilim is loosely translated as giants in some Bibles but left untranslated in others. Some traditional Jewish explanations interpret them as fallen angels.” The practical side of me says that this is a reach, since initial writings suggest Nephilim as being in the “Land of Canaan,” meaning an area that today encompasses Israel, the West Bank and Gaza, Jordan, and the southern portions of Syria and Lebanon. Yet, there’s also an obscure reference to a colonial minister named Cotton Mather who believes he found fossilized nephilim leg bones and teeth near Albany, New York in 1705. This all gets a little crazier and more mysterious as we go along …!

Kukuschka: An Ambitious Bird Passionately Follows the Sun in a Windy Stop-Motion Short by...

With Soul, Pixar Attempts to Make a Radically Different Kind of Animation