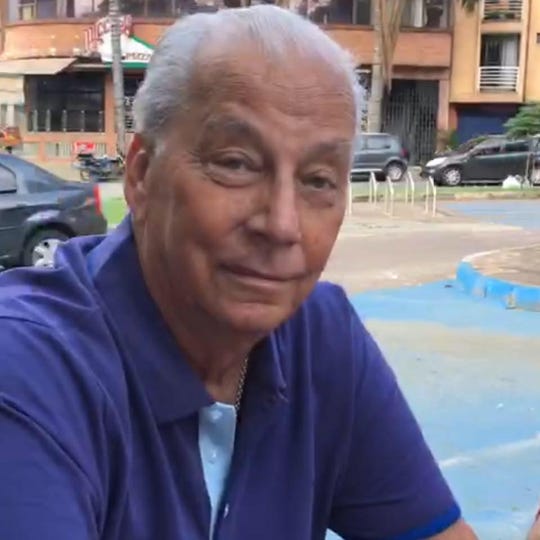 Ed Sellian, 77, of Stuart – The man who commissioned and paid for the sailfish statue in downtown Stuart – sculpted by artist Geoffrey Smith – died Dec. 8. (Photo: USATHO)

It’s hard to miss the 18-foot blue and gold bronze sailfish sculpture in downtown Stuart. When erected in 2002, the statue was an ideal way to commemorate the self-proclaimed “Sailfish Capital of the World.”

Finding the funds to do so was the only thing standing in the way — until Ed Sellian stepped in.

“It seemed like a good way for me to give something back to Stuart, to a community that’s been good to me and my family,” Sellian told TCPalm in 2002. “I want it to be something the people of Stuart can be proud of.” 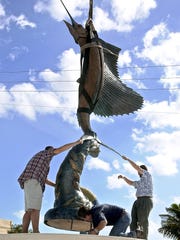 Jason Kresser (from left), Jeanann Paulus, Jim Paulus and Geoffrey Smith attempt to secure the 3,000 pound sailfish sculpture in the center of Sailfish Circle in September 2003. Kresser of Tequesta was Smith’s apprentice and the Pauluses were from the Eagle Bronze Foundry and Gallery in Wyoming. (Photo: DEBORAH SILVER/TCPALM)

With initial plans to “do nothing but fish” when he moved to the city full-time in 1992, Sellian changed directions and began a new company, NuCO2, whose website says it’s the nation’s largest provider of bulk carbon dioxide systems and services for carbonating and dispensing fountain beverages.

Sellian never revealed the cost of the symbolic sailfish statue, nor did Stuart sculptor Geoffrey Smith.

Many guesstimated its cost, based on an 8-foot sailfish sculpture in Smith’s catalog listed at $39,000. The city spent about $100,000 on the fountain that surrounds and sprays water onto the sailfish.

Visitation will be from 4-7 p.m. Thursday, Dec. 12, at the Treasure Coast Seawinds Funeral Home, 950 S.E. Monterey Road, with a Celebration of Life Service at 7 p.m.

In lieu of flowers, Sellian’s family asks that a contribution be made to the Cystic Fibrosis Foundation, 700 S. Dixie Highway, West Palm Beach. Donations can be made at cff.org or by calling 561-683-9965.

Catie Wegman is a TCPalm community reporter. Have a question you want answered? She can be reached by email at catie.wegman@tcpalm.com, or you can follow her on Twitter and Instagram @Catie_Wegman and Facebook @catiewegman1.

Artist Seeks to Delay Removal of Berkeley ‘Big People’ Sculptures Over I-80 – CBS...

Mourning the Death of the American Dream

Back in NYC, seeing old friends – The Artsology Blog