The bust in Buffalo’s Martin Luther King Jr. Park looks nothing like the celebrated civil rights pioneer, but this was by design.

That’s the message driven home at a ceremony held Saturday to re-dedicate the memorial sculpture installed just over 36 years ago on Buffalo’s East Side.

Saturday’s re-dedication was partly a celebration of King’s legacy and partly a response to recent criticism of the sculpture’s appearance. The artist intended the 8-foot-tall bronze head to serve as a universal representation of King and his ideals and not a literal likeness, speakers said.

“That’s what he proposed, and that’s what was done,” said Clifford Bell, a former Buffalo Common Council member who led the Martin Luther King Jr. Celebration Committee and who, like King, was born in 1929. A lengthy ceremony at Calvary Baptist Church preceded a brief re-dedication at the memorial site.

Saturday also marked the dedication of a permanent “Making of a Monument” exhibit at the shelter house in the park next to the King memorial offering more information on how the sculpture came to be.

This follows more than a year of pointed objections to the sculpture and calls for its replacement with a statue that better represents what King looked like. Community activist Samuel A. Herbert in 2018 started an online petition and said he would raise money for a new King sculpture.

On Saturday, Bell and others involved with the effort to bring a King memorial to Buffalo recounted that history.

A limited competition took place in 1981, and the city Arts Commission screened the applicants and winnowed them down to three finalists. 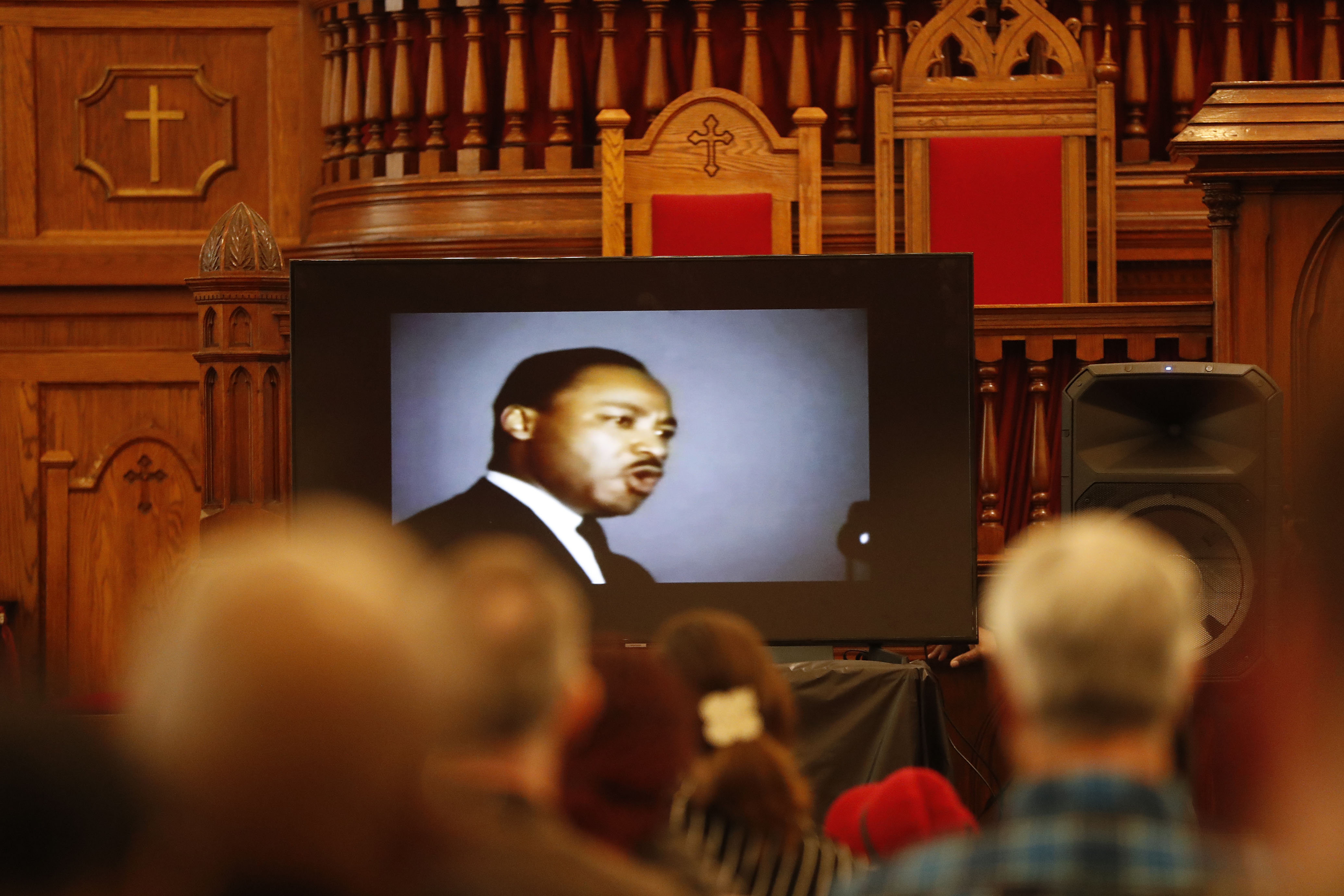 A nine-member panel picked Boston sculptor John W. Wilson after looking at scale models and hearing presentations from each artist, Alfred Price, a longtime professor of urban planning at the University at Buffalo, said in a pre-recorded video interview.

Wilson’s proposal had broad community support, Price said, and everyone understood the bust was a metaphor that did not look precisely like King.

“I want this colossal head to express an enigmatic image that will evoke a sense of ritual and elemental forces that a very wide audience can respond to,” Wilson wrote in his proposal to the committee, as Bell recounted Saturday.

Committee organizers raised about $300,000 toward the design, construction and installation of the sculpture. About 1,000 attended the dedication of the monument plaza on Oct. 1, 1983.

Wilson, speaking that day, said he hoped to capture “the inner spirit and energy of the man.”

James Pappas, a noted Buffalo artist, said Wilson wanted to reach into the past with his work but also create an abstract representation of King that could live into the future.

“In that context, I think the piece itself fulfilled that objective,” Pappas said in a video.

The bust appears to rise from a curved stone wall and is surrounded by pine trees. Below the bust is a relief containing an excerpt from King’s “I have a dream” speech. On Saturday, a layer of snow covered the tree branches, the path leading up to the sculpture and the top of the head.

“Some people may never look at it and like it, but art is like that,” Bell said.

The Buffalo Olmsted Parks Conservancy is planning additional improvements to the area around the sculpture to make it even more of a place where visitors can find solace and contemplation.

Stephanie Crockatt, the organization’s executive director, said outside the church that the conservancy still is seeking input from the community on what they’d like to see at the monument.

As a first step, however, an audio tour available through smartphones is now up and running for visitors to the King memorial. Later this year it will expand to the rest of Martin Luther King Jr. Park.

After the forum, Bell said he hopes this presentation and the permanent exhibit settle the debate over the King sculpture once and for all.

Horror as callous vandals pick up $15,000 artwork and throw it off the cliffs...

Gritty, everyone’s favorite mascot, just got his own butter sculpture | Us World News

Someone is ready for Valentines Day … already? – The Artsology...

The Story of the Scorched Melania Trump Sculpture in Slovenia