“Go big or go home” could be the tagline of Teatro Dallas’ 19th International Festival. Its two world premieres are collaborative, experimental music-dance pieces still being assembled as we speak. Though she was involved in conceptualizing the heady new works, executive director Sara Cardona has mostly left it to the guest artists to come up with engaging evenings.

“That’s the beauty of it,” Cardona says in a phone interview. “I’m not on pins and needles, but I don’t know what they’re going to be like. It’s a little bit different from previous festivals where we had seen what was going to be presented. I have trusted that because they’re fantastic performers.”

Improvisation was needed because some of the artists she originally invited couldn’t get visas, including a Spanish opera singer living in Mexico and a Colombian residing in Germany. Instead, Cardona found domestic performers with international training or ties, and ideas that came from the very circumstances that led to their inclusion.

“It’s a very challenging thing right now to do anything with international artists,” Cardona says. “The strength of both of these groups lies precisely in that they’re going out into other parts of the world, gathering information and bringing it back to their work.”

The first piece, scheduled for Jan. 25 at the Latino Cultural Center, is Electric Hamsa, a collaboration between Los Angeles belly dancer Alia Mohamed and her father, the famed Dallas drummer Jamal Mohamed. They will be accompanied by percussionist Jonathan Jones and visual projections.

At Cardona’s suggestion, Electric Hamsa taps Arab-futurism, a loose movement of novelists, filmmakers and performing artists who filter traditional Middle Eastern cultural practices through dystopian science fiction to mirror the contemporary world. Arab-futurism is related to Afro-futurism, which has spread to popular culture in films like Black Panther.

Alia Mohamed has appeared in Tarantina, an L.A. burlesque show inspired by the films of Quentin Tarantino, and has studied a variety of international dance styles. In Electric Hamsa, she plays the theremin and wears a glittering gold-metallic costume that reflects her work with visual-art-oriented designers.

Jamal Mohamed, who was born in Lebanon, leads the Dallas world music ensemble D’Drum and is on the faculty of Southern Methodist University. His group may be best known for its collaboration with the Dallas Symphony Orchestra on the 2011 premiere of Gamelan D’Drum, written for them by Stewart Copeland, drummer of the punk-reggae band the Police.

“I thought it would be really interesting, especially in this climate we’re in right now, to find a way to dispel these ideas that people have about the Middle East and belly dance, things that have been misperceived in the media as being in the past, or rooted just in folk traditions,” Cardona says. “Some of these places have become very dystopian, our own society, too, the same places where these artistic collisions are happening… Alia was totally into it.” 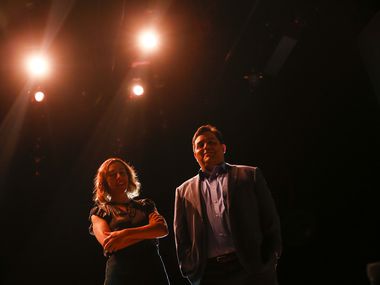 Teatro Dallas is no stranger to dystopian narratives. Co-founded 35 years ago by her parents, Cora Cardona and Jeff Hurst, the company has specialized in bringing rarely seen Latin American political plays to Dallas. Cora Cardona stepped down as artistic director in 2017 to pursue theater projects in Mexico. Over the years, Sara Cardona, who is primarily a visual artist, translated nine of the scripts.

“The writers came from these dystopian situations where they have had to become more effective with language, circumventing government, so there’s that really strong surrealist tendency,” she says. “Teatro Dallas has really embraced that because that was Cora’s aesthetic. And she understood it not just as a thing of the past, but its power is in the present. I want to keep honoring that legacy.”

The festival continues Feb. 1 with Paper Piel, which brings together dancer-choreographer-performance artist Jimena Bermejo and musician Chris Brokaw. Both are based in Boston and will appear on the Latino Cultural Center stage wrapped in paper constructions that look like sculptures. The action will include a call-and-response with the audience, Cardona says.

“I like Jimena’s aesthetic because she’s very sort of minimal, low-tech. I don’t know exactly how it’s going to work out, but apparently the paper is part making sounds and part of the dance. There is the idea of paper as a skin, and paper as a surface that everyone uses daily, though it’s kind of disappearing because of digital. They’re reimagining it as part of the body.”

Bermejo is originally from Mexico City, where her mom is a well-known jazz musician. Brokaw has roots in post-punk rock bands like Codeine and Come who released indie records in the 1990s. He’s also the drummer in the atmospheric Dallas guitar band the New Year.

Now that Teatro Dallas has a permanent home at the Latino Cultural Center, experimentation and collaboration could grow, Cardona says. Along with the Dallas Office of Arts and Culture and the center’s other resident troupe, Cara Mia Theatre Co., the company is raising $500,000 toward the construction costs for a new black-box space expected to open in 2021.

After all, we’re again in the ’20s, a hundred years after modernity brought a new sensibility to the arts with movements like Dada, expressionism and surrealism. Though the International Festival has been primarily theater-driven, Teatro is no stranger to multigenre mashups.

“As a visual artist, I really like the whole aesthetic of assemblage from the 1920s, where they were thinking about montage and slicing things up,” Cardona says. “Though I have slightly a different view from Cora, that’s still part of the excitement. How can we take what she’s already done but keep moving it and adapting it?”

Electric Hamsa on Jan. 25 at 7 p.m. and Paper Piel on Feb. 1 at 8 p.m at the Latino Cultural Center, 2600 Live Oak St. $25. 214-871-5000. teatrodallas.org. Syrian food will be served before the Electric Hamsa performance. The night before, on Jan. 24 at 7 p.m., a free event will be held at Artstillery, 723 Fort Worth Ave., featuring interactive Turkish poetry, Middle Eastern food and tea, and a dance class with Alia Mohamed.

Art in the garbage – The Artsology Blog

How We Can Hold Art Galleries Accountable