WITTENBERG, Germany (AP) — High on the wall of a German church where Martin Luther once preached, an ugly remnant of centuries of anti-Semitism is now at the center of a court battle.

The so-called “Judensau,” or “Jew pig,” sculpture on the Town Church in Wittenberg dates back to around 1300. It is perhaps the best-known of more than 20 such relics from the Middle Ages, in various forms and varying states of repair, that still adorn churches across Germany and elsewhere in Europe.

Located about 4 meters (13 feet) above the ground on a corner of the church, it depicts people identifiable by their headwear as Jews suckling on the teats of a sow, while a rabbi lifts the animal’s tail. In 1570, after the Protestant Reformation, an inscription referring to an anti-Jewish tract by Luther was added.

Judaism considers pigs impure, and no one disputes that the sculpture is deliberately offensive. But there is strong disagreement about what consequences that should have and what to do with the relief.

A court in the eastern city of Naumburg will consider on Tuesday a Jewish man’s bid to make the parish take it down.

It’s the second round in the legal dispute, which comes at a time of mounting concern about anti-Semitism in modern Germany. In May, a court ruled against plaintiff Michael Duellmann, who wants the relief put in the nearby Luther House museum. 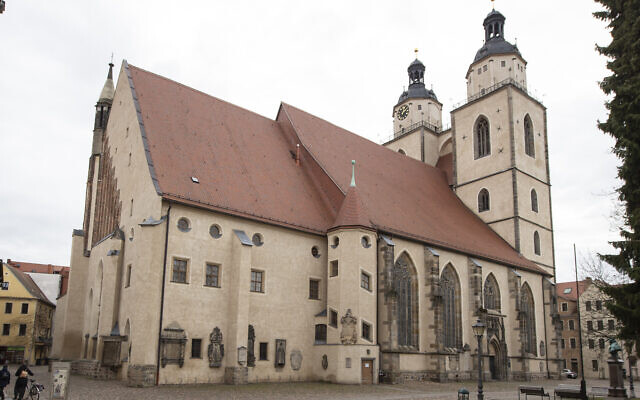 In this Tuesday, Jan. 14, 2020 photo people walk beside the Stadtkirche (Town Church) in Wittenberg, Germany. The church contains a so-called ‘Judensau,’ or ‘Jew pig,’ sculpture which is located about 4 meters, 13 feet, above the ground on a corner of the Church (AP Photo/Jens Meyer)

Judges in Dessau rejected arguments that he has a right to have the sculpture removed because it formally constitutes slander and the parish is legally responsible for that. Duellmann appealed.

The relief “is a terrible falsification of Judaism… a defamation of and insult to the Jewish people,” Duellmann says, arguing that it has “a terrible effect up to this day.”

Duellmann, a former student of Protestant theology who converted to Judaism in the 1970s, became involved in the issue in 2017 — the year Germany marked the 500th anniversary of the Reformation. He says he joined vigils in Wittenberg against the sculpture and was asked if he would be prepared to sue when it became clear that the church wasn’t prepared to take it down.

Luther is said to have nailed his 95 theses to the door of another church in Wittenberg in defiance of Roman Catholic authorities in 1517, starting the German Reformation. He also is known for anti-Jewish invective, from which Germany’s Lutheran church has distanced itself.

When the church was renovated in the early 1980s, the parish decided to leave the sandstone sculpture in place, and it was also restored. In 1988, a memorial was built on the ground underneath it, referring to the persecution of Jews and the killing of 6 million in the Nazi Holocaust.

In addition, a cedar tree was planted nearby to signify peace, and a sign gives information on the sculpture in German and English. 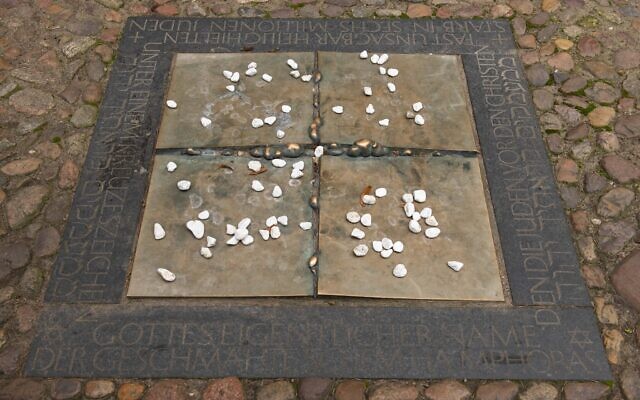 In this Tuesday, Jan. 14, 2020 photo stones are dropped at a commemorative plaque besides the Stadtkirche (Town Church) in Wittenberg, Germany (AP Photo/Jens Meyer)

Pastor Johannes Block says the church is “in the same boat” as the plaintiff and also considers the sculpture unacceptably insulting. The parish, he says, “also is not happy about this difficult inheritance.”

However, he argues that the sculpture “no longer speaks for itself as a solitary piece, but is embedded in a culture of remembrance” thanks to the memorial. “We don’t want to hide or abolish history, but take the path of reconciliation with and through history,” he says.

“The majority of the Town Church parish doesn’t want this to become a museum piece, but to warn and ask people to remember history on the building, with the original,” Block says. 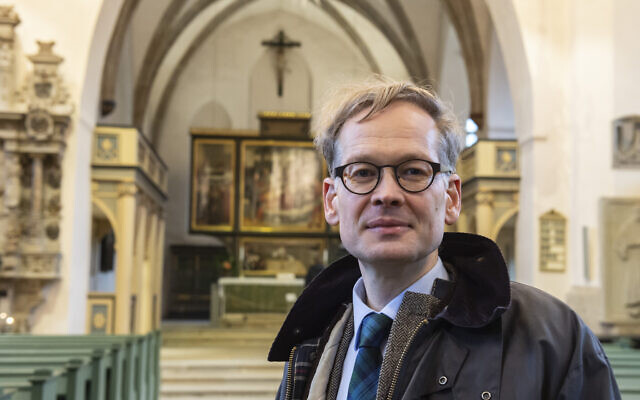 In this Tuesday, Jan. 14, 2020 photo pastor Johannes Block poses for a photo in the Stadtkirche (Town Church) in Wittenberg, Germany (AP Photo/Jens Meyer)

Duellmann isn’t impressed. “The ‘Jew pig’ is not weakened” by the memorial, he says. “It continues to have a terrible anti-Semitic effect in the church and in society.”

There are mixed opinions in the church, too. Last year, the regional Lutheran bishop, Friedrich Kramer, said he favors taking down the sculpture from the church wall and exhibiting it in public at the site with an explanation. He doesn’t favor putting it in a museum. He praised the 1988 memorial but said it has weaknesses, including a failure to address Luther’s anti-Semitism.

If judges do order the sculpture removed, that may not be the end of the story. Block says the church would ask authorities to assess whether it is possible to remove it from a building that is under a preservation order, and more talks with the court would probably follow.

The church is a UNESCO World Heritage site, a status that it gained in 1996.

Plaintiff Duellmann has little sympathy with the church’s preservation order dilemma. He contends that authorities deliberately failed to mention the offending sculpture at the time of the application in order not to endanger it.

Whatever the outcome, Block says he regrets that the case went to court.

“We are not advocates and initiators” of the sculpture, he says. “We are heirs and are trying to deal very conscientiously with this inheritance.”

From da Vinci to Bosch, the 10 Most Googled Paintings of...